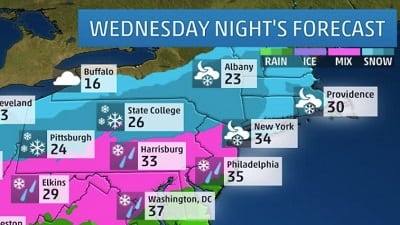 Philadelphia region is bracing for another major storm with expected snowfall of 12″ on Wednesday.  The biggest problems besides the snow is that the ground is already saturated with rain from one of our wettest February’s on record plus the recent weekend storm.  New heavy moisture rich snow and high winds will knock over more trees resulting in another round of power outages.  PECO customer of which over 700,000 lost power for an extended period of time may be getting a double dose of power outages.  For customers that don’t have a residential power generator – it may be time to make the call.  These storms are no longer a freak occurrence and may become more regular.  We’ve had 4 major storms resulting in loss of power for over 1.5 million homes in the past 3 years.  Purchase an emergency back up power generator can save a lot of money and hassle from power outages.

Emergency generators automatically turn on the moment the system senses a loss of utility power.  Power is restored in a few seconds and will run indefinitely depending upon set up.   Whole home generators which will power your entire home generally cost approximately $10,000 and if maintained can last 25 years.   It’s probably a good time to consider purchasing a generator if you don’t want to face another day without power.

While the midweek storm will not become as powerful as the recent bomb cyclone, part of the northeastern United States can expect renewed power outages, heavy snow and widespread travel disruptions. The storm that dumped heavy snow on the northern Plains will fizzle over the eastern Great Lakes and central Appalachians Tuesday into Tuesday night. However, the storm is projected to reorganize and strengthen along the coast as many storms often do from Wednesday into Thursday. “For most people in the Northeast, especially in New England and the coastal mid-Atlantic, this will be a more typical winter storm or nor’easter,” according to AccuWeather Senior Meteorologist Alex Sosnowski.

“The big problem is that the storm this week is coming so soon after the destructive storm from last Friday,” Sosnowski said. “It will disrupt cleanup and restoration operations and is likely to cause a new but less extreme round of travel delays, power outages and damage from falling trees.” People in much of the mid-Atlantic and in southern New England will notice much less wind with the storm on Wednesday and Thursday compared to last Friday and Saturday. “The storm will still pack a punch from New Jersey to Maine,” Sosnowski said. “Small craft should remain in port, and seas are likely to again become rough enough to toss around large vessels offshore.”

Residents who had their power restored early this week may find themselves back in the dark at midweek. High-profile vehicles may have difficulty navigating the high bridges in New York City and Boston. Despite winds set to buffet the beaches, coastal flooding is not likely to be as severe as during the bomb cyclone. The quick pace of the storm should limit any issues to minor problems for one or two high tides, especially in areas that suffered beach erosion the past few days.

Heavy snow likely to fall over a broad area

Many areas in northern New England that escaped the last storm’s full wrath may face heavy snowfall from this storm.

Snowfall in northern and western New England would be dry and powdery in nature and subject to blowing and drifting.  Some portions of western and northern New England may receive between 1 and 2 feet of snow. “The band of heavy snow is likely to overlap at least part of the area that received more than a foot of snow from last Friday’s storm,” Sosnowski said. “Parts of the Poconos and Catskills may have 3-4 feet of snow on the ground following this new storm’s snow and what remains on the ground from last week.” Accumulating snow is forecast to reach Baltimore, Philadelphia, New York City and even Boston. A heavy amount of snow, enough to shovel and plow, is projected in the swath from northern Delaware and southeastern Pennsylvania to metro New York City, central Connecticut and central Massachusetts. “Airline passengers should expect a new round of flight delays and cancellations in the Northeast with some ripple-effect delays elsewhere in the nation,” Sosnowski said. Crews and aircraft may get tied up or rerouted due to deicing operations, slippery runways, poor visibility and gusty winds.

Track of storm to determine exact snowfall in Interstate 95 corridor

A shift in the storm track by as little as 25 miles can mean the difference between a foot of snow or a much lesser accumulation in the I-95 corridor. Areas near the center and to the east of the track are more likely to see a mix of snow and rain or even all rain for a period of time as southerly winds pull in warm ocean air.

“Mother Nature may have one more potent, coastal storm for the Northeast into the middle of the month before the pattern shifts somewhat,” Sosnowski said. “After the storm this Wednesday and Thursday, a new storm may gather intensity along the Atlantic coast from Sunday, March 11, to Monday, March 12.”

Later in March, additional storms that brew may also be potent, but the storm track may progress farther to the west over the middle of the nation.