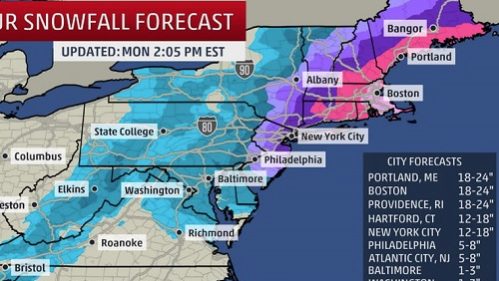 You may have seen this week’s storm described using the terms “bombogenesis” and “bomb cyclone.” Bombogenesis happens when “a midlatitude cyclone rapidly intensifies, dropping at least 24 millibars over 24 hours,” according to NOAA. This extreme and rapid change in pressure forms a very strong storm, a so-called “bomb cyclone.” Bomb Cyclone is not an official term. Meteorologists and scientist use “bombogenesis.”  According to AccuWeather, these storms occur most commonly off the east coast and the recipe for it to form is “cold air along the land, warm air over the water.”  Bomb cyclones happen almost every winter. This week’s storm will make travel nearly impossible in parts of the East Coast.

Is it bombogenesis a real thing?  Apparently so as we suffered through a 48 period of high winds with gusts nearing 70 miles per hour and toppling trees everywhere.  Power Outages were everywhere with nearly 700,000 PECO customers without power of there 1.8 million customers.  The power outages are still rampant nearly 5 days after the storm.  The extreme power outages have stressed PECO’s repair team requiring PECO to outsource repairs to teams from all over the country.

Sadly, people who suffered through Sandy and other similar storms in 2017 and 2015 and did not purchase residential generators may face similar power outages with upcoming storms this week 3/7/18.  Emergency generators operate automatically when the home loses its power supply the Automatic Transfer Switch “ATS” will automatically switch over the the generator which turns on the engine and the generator will begin supplying back up power to the home.  For homes powered by natural gas, the generators will run indefinitely but during major power outages (multiple days) may need an some oil replacement.  Customers that have generators powered by propane may need to have the tanks refueled after a few days.   That said, having an emergency generator is an affordable solution for those that can’t lose power (for health or security reasons) or just don’t want the hassle and worry associated with power outages.